The Circle Unbroken Is a Hard Bop – 1992
Harris’ first endeavor in his new direction was “The Circle Unbroken Is a Hard Bop,” a collaboration with poet Sekou Sundiata that premiered in 1992 at City College of New York’s Aaron Davis Hall and subsequently toured colleges and fine arts institutions around the country before settling in for an extended run at New York City’s Nuyorican Poets Cafe. “In those settings, I was exposed to a new audience–people who don’t go to jazz clubs but might go see theater or dance or poetry,” Harris says. “So we got some different people coming to see us without losing our musical integrity.”

The Return of Elijah, the African – 1996
A music and theater piece exploring the historical process and human conditions that gave rise to the African slave trade by composer Craig Harris, writer Sekou Sundiata, and griot/musician Doudou N’Diaye Rose. http://mapfund.org/grant_393.html

Celebrating Three Decades of Harlem’s History
Composer, performer, curator, and artistic director, Craig S. Harris, is the visionary who captured the cadence of Harlem by setting it to music. Most people when speaking of the grand days of Harlem talk of the early 1920s during the cultural renaissance, or the era of rebellion in the 1960s when Harlem rose up to support Malcolm X and Martin Luther King, Jr.  Rarely mentioned is the 30-year span between 1977 and 2007. Indeed, many consider these 3 decades a dark period in Harlem’s history when drugs consumed the community. Harris chose to cast Harlem in a different light, by holding up to the light, the sights, and sounds of a community struggling to keep its cultural stamp squarely on an ever-changing community.

It was Harris’ ambition and ultimate vision to record the shades, tempos, richness, and special language of Harlem through the creation of his 45-minute composition and musical work; a masterpiece he coined TriHarLenium. TriHarLenium represents 3 decades of Harlem history as it transitioned into the new millennium.

God’s Trombones is based on James Weldon Johnson’s classic collection of poems that refigure inspirational sermons by itinerant Negro preachers. In collecting these sermons in free verse form, Johnson strove to document and preserve a unique African American cultural tradition in the face of increased assimilation into a more mainstream American way of life. Harris looks to Johnson’s poems for inspiration to produce a musical interpretation of the rhythm and cadence that Johnson found in the original sermons.

Although deeply rooted in the work of these Christian preachers, Harris’s vision for God’s Trombones looks beyond the sectarian roots of the sermons to the realm of the spirit that underlies and moves all religious experience. Thus, God’s Trombones both hearkens back to the spirit of the original work and reinterprets it for a contemporary audience. At its most fundamental level, the project strives to bring Weldon’s poems, and the unique preaching style they preserve, to life. Harris’s composition will consider God’s Trombones through the intersection of sound (specifically, the trombone shout form) and word and movement. Technically, Harris envisions a work that is operatic in scale, with the pitch, melody, and harmony finding inspiration in the original poems, with the text (and its recitation) and the choreography (and its presentation) serving as partners in the overall composition.

SOULS WITHIN THE VEIL

"Souls Within the Veil" was composed to commemorate the centennial of W. E. B.  Du Bois'  The Souls of Black Folk. After one hundred years the book sets a high standard for those who aspire to compose, regardless of the medium in which they choose to express themselves. The compositional craft displayed by Du Bois has inspired Craig to compose a musical score that attempts to capture Souls' timeless social commentary, where Du Bois melded the experience of enslaved people and the English language into a state of Double Consciousness, modulating between social issues of the past-present. Examining the text through the lens of its final chapter, Craig presents a work composed for ten souls using musical instruments consisting of four saxophones, two trumpets, one trombone, one bass, and two percussionists. They combine improvisation and composition to the place where they become one. That state of Double Consciousness is where Craig navigates harmonically, rhythmically, and melodically not only within the shadows of the Veil but within a continuum that predates the Veil by centuries. It is a music Du Bois refers to as "the most beautiful expressions born this side of the seas." This work is Craig’s answer to the question "How does it feel to be a problem?

A multi-media work based on the movement of Muhammad Ali with video.

As an artist, it is sometimes necessary to pause and acknowledge an icon of the recent past before moving into the future.  We regard Muhammad Ali as one of the prime catalysts of the racial and cultural transformation that took place in the United States in the 1960s.  Muhammad Ali’s impact extends well beyond his appeal as a champion in the boxing ring.  His razzle-dazzle style and ability to deliver the punch, has inspired millions across America and all national boundaries to see what is possible, to see what one man can do.  His masterful showmanship thrust him into upholding his self-titled iconic status as “The Greatest.”  The 21st century – now in its infancy – holds many questions.  Through the life of Muhammad Ali, Brown Butterfly will take its viewers on a multi-layered, percussive “dance” into some of the forces that propelled us in the 20th century and what they signify for the next.

It is our intention that the audience for Brown Butterfly will experience Ali in all his physical and verbal glory; they will see his motion, pulse with his beat, and feel his power. Brown Butterfly will present the power of a man who stood as a humanitarian with great integrity and who was a beacon of hope for millions through America’s complex racial, social and political environment of the time.

BREATHE is the creation of trombonist/composer Craig Harris, who comes from a tradition of using art as a cultural facilitation to help promote change. BREATHE is a multimedia work performed by a large ensemble of musicians making a sonic statement in response to the long-term and current injustices inflicted upon African American people.  BREATHE is offered to support the community in staying resilient and persistent in fighting for justice.

BREATHE premiered on October 16, 2016, with an ensemble of nearly 50 musicians at a free concert in a Harlem church. In January 2017, Harris presented BREATHE at the 13th Annual Winter JazzFest, and most recently BREATHE was performed at the Outreach Festival in Schwaz, Austria featuring an international ensemble of musicians.

BREATHE is a call to action for conscious and committed musicians to gather to blow their horns. It is a call to create an improvised symphonic expression and harmonic response to the social and political dramas that are unfolding in our time. It is a recognition that we must breathe to heal, survive, prosper, make music, to live. BREATHE is a serious statement and a joyful noise to teach and inspire the community. We want to breathe.  (James Plunky Branch)

The primary goals of the residency are three-fold and include: (1) creating new work and revisiting old work with a diverse group of musicians who are familiar with my work; (2) expanding my network of musicians by inviting new and less experienced musicians to sit in with the band when the regular members cannot attend (in the spirit of Charles Mingus and Sam Rivers rehearsal bands); and (3) to expose the community to my creative process by inviting them to rehearsals and performances. 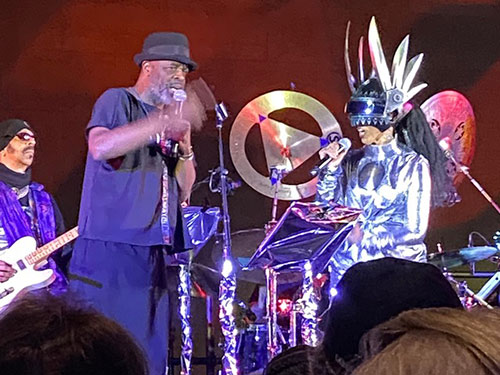 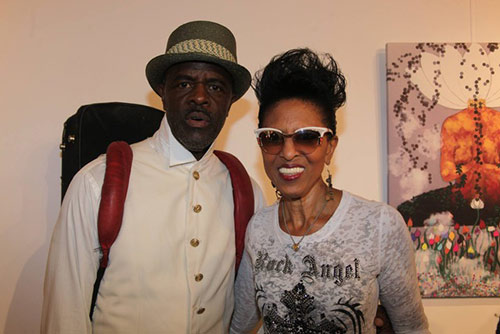 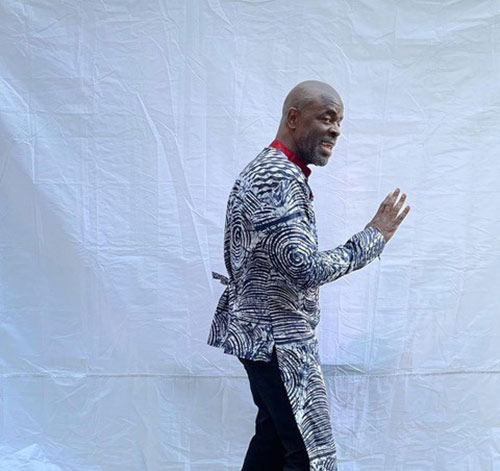 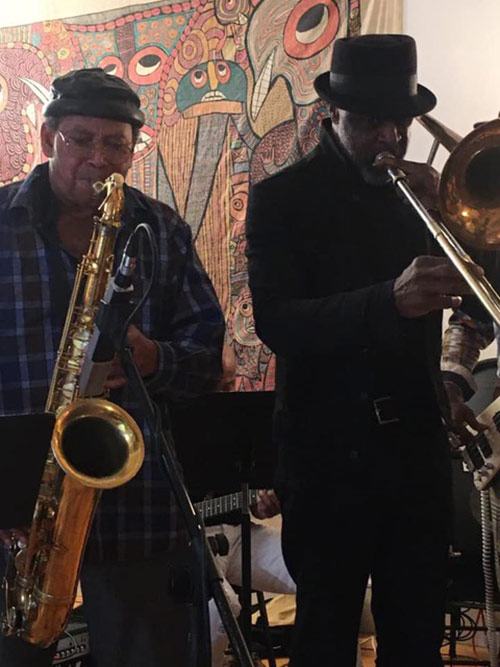 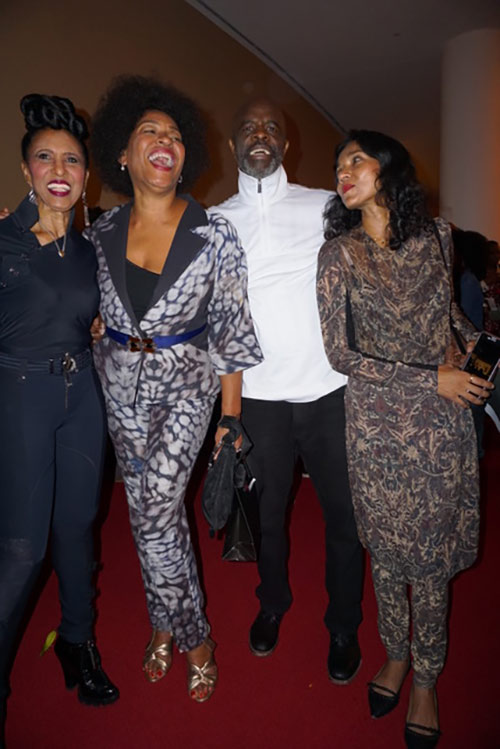 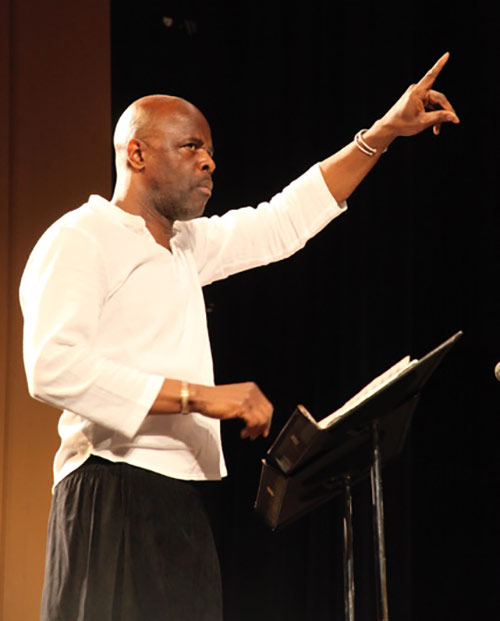 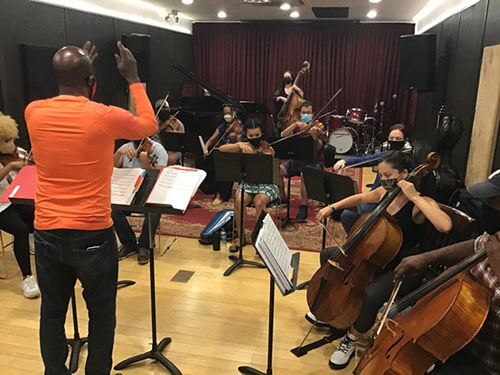 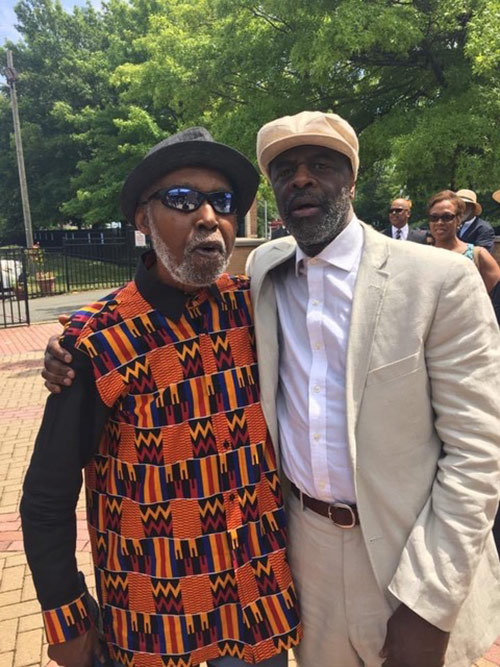 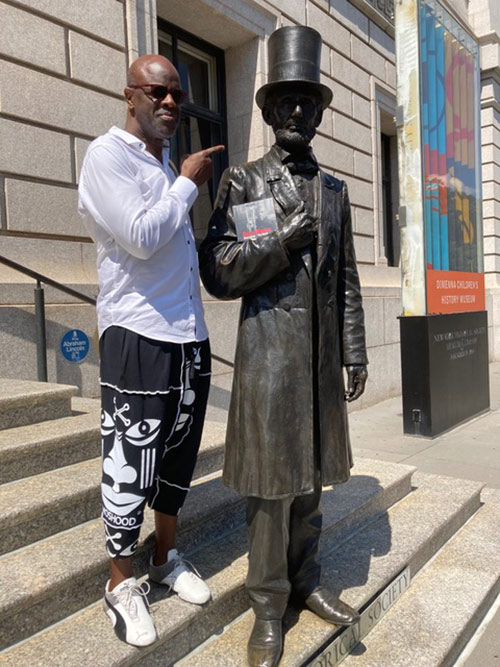 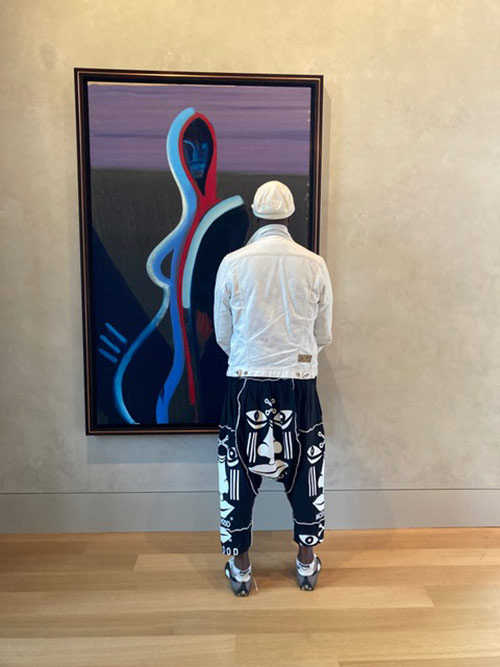 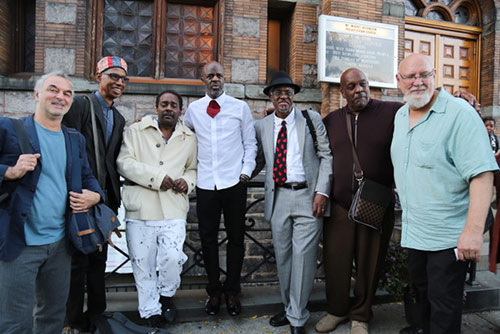 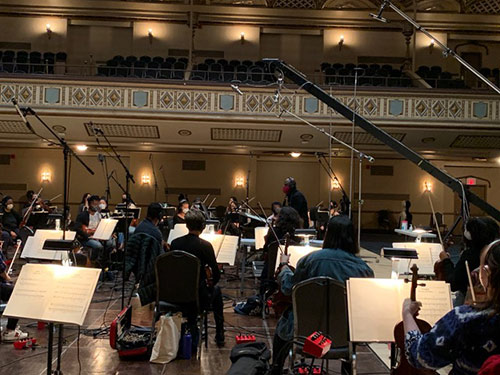 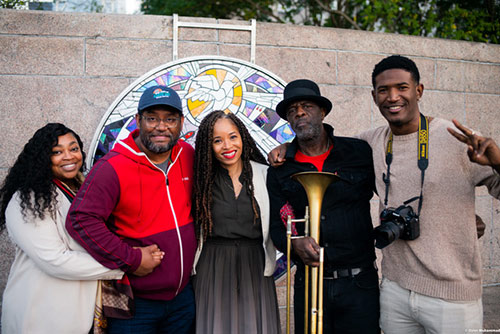 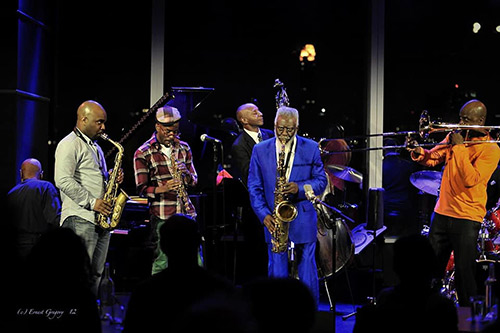